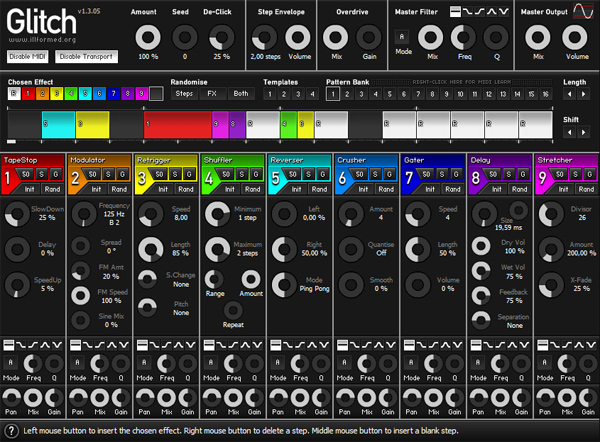 Probably the first usable glitch plugin. In KVR this used the be called the fuck shit up section.

9 different effects can then be applied and mixed into those segments and the sequence looped. Each effect has a few parameters, for example the retrigger effect has knobs for speed, length and pitch.

The effect for each segment can be random, preset to one of the effect modules or bypassed to the original clean audio. There are also 4 different filters available for the master sound and for each effect.

Between its flexible routing matrix, multiple effects processors and extensive modulation options, Cryogen enables you to dial in vast variations of special effects. Cryogen takes buffer effects one step closer to the edge!

We got this as part of one of plugin boutiques deals so at 5 euro the only real qiestion is would it end up being used in a tune as the value for money paret is a no brainer. The screen is too small and can't be resized and while this is a small gripe it is actually big enough to make the experience unpleasant, at least until the labels are no longer needed.

Just like a real modular one cannot simply turn knobs to full whack indiscriminately as on things like gates, bleed alone can render the process indistinguishable. So keeping knobs at a max of 90% until one gets a feel for things is advised. At this point I wanted more control over the LFOs to sync or retrigger on command, this was not possible.

Instead I simply passed all of the various loops and hits for this particular tune through the presets and saved all the sounds as ableton clips.

The presets are impressive and this is how the plugin is sold and fair enough, used as a preprocessor to gather sounds can really push glitches (with tails) to new terrain. But so far, as a device to manipulate stuff live, the jump from one sound to another seems too complicated. But I'll return to this to confirm. 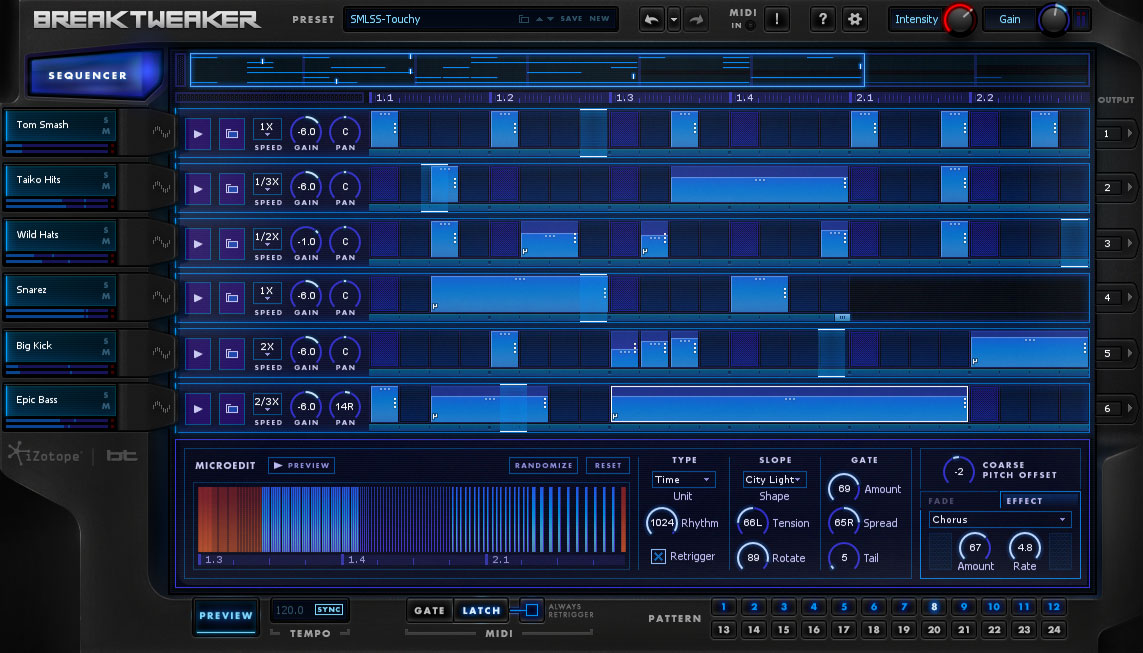 With their creative forces combined, BT and iZotope bring you an instrument that will change the concept of rhythm, beat and drum programming as you know it. A prodigious producer, technologist, and GRAMMY®-nominated composer, BT is renowned for inventing the "stutter edit" as a musical technique, as found in Stutter Edit, the first product release from BT and iZotope.

Traditional sequencing is so 1984. With BreakTweaker, you can slice and manipulate audio at a resolution that would blow MIDI’s mind (and your DAW’s). Thanks to the MicroEdit Engine within BreakTweaker, each step can be repeated or chopped at an infinitesimally small rate, allowing you to create buzzing musical harmony, texturize a step with extra rhythms, or even use rhythm as a synthesis tool, locking drum hits to individual pitches. Even the most ordinary of drum hits can be transformed into a thing of the future.

Whether you’re working with drums, bass, or abstract noises, BreakTweaker is driven by the patterns you define in the Sequencer. Freed from the constraints of a pre-defined time signature, BreakTweaker’s Sequencer can program anything from basic patterns to unique tracks of patterns with individual lengths and speeds.